“Do not be anxious about anything, but in everything by prayer and supplication with thanksgiving let your requests be made known to God. And the peace of God, which surpasses all understanding, will guard your hearts and your minds in Christ Jesus.”—Philippians 4:6–7, ESV 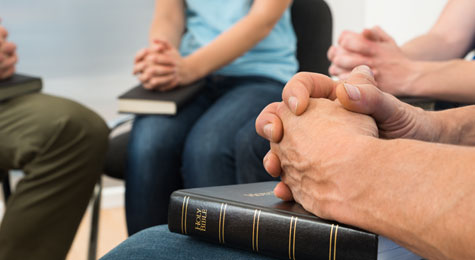 One does not expect anything dramatic at the Surgery Out-Patient Clinic. The consults are quick, the diagnoses usually straightforward, save for one or two that will provoke clinical curiosity, like a rare syndrome or disease, but even those don't come by every day.

I waited for the next patient in my little cubicle that morning, expecting nothing unusual, until Armando, a man in his early forties, sat in front of me. With him was his wife, Liza, a high school teacher, who held his hand tightly. I asked him what brought him to the clinic. His initial reaction was surprise—I looked young, perhaps only a little older than his eldest child. He told me that he was being referred because of a tumor in his rectum. The doctor in the province who had first seen him suspected cancer.

“Saan po kayo galing?” I asked him. (Where are you from?)

“South Cotabato,” he said. He mentioned “Polomolok,” the town where he had worked as a police officer for years.

I told him, excitedly, that I was born and raised in the same area; that my grandmother still lives in Polomolok; that I visit her occasionally whenever I get the chance to go home. The consult was becoming more exciting. Our small talk brought out the following details, which I later confirmed: that he knew my father, my aunts, my family, from way, way back. It occurred to me that we live in a small world, indeed.

After my examination, I told him we had to rule out a possible malignancy—a fancy medical term for “cancer.” I advised him what course of action to take: a series of lab tests, a biopsy, possibly surgery and chemotherapy, depending on the test results. He was quiet, contemplative, taking it all in. For many people, “cancer” is practically a death sentence. But there was no trace of worry in his face, only acceptance.

Then Liza spoke, “Sa palagay niyo po, may pag-asa pa ba, Dok? Gagaling pa ba siya?” (What do you think, Doc, is there still hope? Will he get better?)

I told them that there is always hope, and that we will do our best to take care of him.

Liza, the more outspoken one, told me about how God was faithful to them, from the time when Armando had first showed symptoms of unexplained weight loss and changes in bowel movement to his present consult. Teary-eyed, she told me that they were Christians, born and raised in Christian families, actively serving in their local church. Their church members helped and interceded for them, and even assisted them financially. Their initial shock at the possibility of Armando having cancer, the barrage of initial lab tests they had to go through, brought them closer to the Lord. “Alam naming andiyan ang Panginoon, kahit gaano man kahirap ang pinagdadaanan namin.” (We know that God is there, no matter how tough it gets.)

“At totoo naman, di ba, na may assurance tayo kung saan tayo pupunta kung kukunin man tayo ni Lord? Hindi ko rin ma-explain, Dok, pero panatag ang loob namin kasi alam naming hindi kami papabayaan ng Diyos.” (And isn't it true that we have the assurance of where we're going if the Lord eventually takes us? I can't quite explain it myself, Doc, but we are at peace because we know God will not abandon us.)

I told them I couldn't agree more.

A few weeks later, I would see them at the charity ward, Armando comfortably lying in his bed, both of them reading their dog-eared KJV Bible, sharing their oranges to the patients beside them, and being such encouragements and beacons of hope. They would share the gospel to the other patients and would even offer to pray for them. Armando would tell me that the biospy confirmed that the mass was colorectal cancer. In the next few months he would undergo radiotherapy, then surgery, then chemotherapy, and his response to those treatments would be excellent.

I wish I'd see them again, if only to hear their praises and thanksgiving to God who has never once left them.

Names and identifying details were modified.

There is no better time than now to be alive for a single person. We have at our fingertips the wo...

“What do you think of God?” I asked a friend as we waited for our turn to enter the op...

Word and Witness
The Source of Our Joy and Security in...

The blessing of work is not without challenges. Assisting dismissed workers for years taught me th...

Word and Witness
Is your Work Your Offering?

In 2014, I was employed in one of the biggest companies in the country and was working for one of ...

One does not expect anything dramatic at the Surgery Out-Patient Clinic. The consults are quick, t...