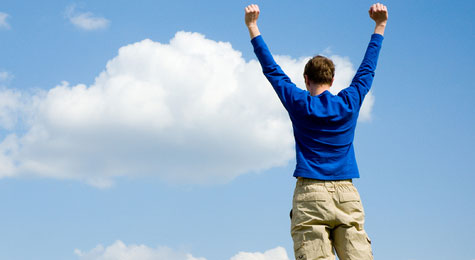 How do you usually begin your prayers? Many of us have the tendency to start with petitions right away. We come to God with our desires and requests, presumably not just for ourselves and our families, but for other people, as well.

I wonder, though, if we have developed the habit of thanking God for other believers? The apostle Paul's attitude toward the Thessalonians is a wonderful example that we should follow.

Paul was used of God to found the church in Thessalonica, and even after his time there was over, he continued to look for news about them and pray for their spiritual growth. In 1 Thessalonians 1:2-3, 2:13, and 3:9-13 we get a sense of the great joy and comfort that the apostle received from these believers, and why he would give thanks to God always for all of them.

Paul Gave Thanks for Encouragement

Firstly, Paul was grateful to God for encouraging him with the wonderful work He was accomplishing in and through the Thessalonians. As dedicated as Paul was to the salvation of souls, it was exhilarating for him to see the abundant fruits of his labor.

“For what thanks,” he exclaimed, “can we render to God for you in return for all the joy with which we rejoice before God on your account” (I Thess. 3:9)!

How rewarding it must have been for him to be able to write,

“You also became imitators of us and of the Lord, having received the word in much tribulation with the joy of the Holy Spirit” (I Thess. 1:6).

Paul Gave Thanks on Behalf of the Brethren

Secondly, Paul's filial love for the Thessalonians meant that he rejoiced with them over their spiritual victories. He was applying the principle he would later express in these words:

“a nursing mother tenderly cares for her own children” (1Thess. 2:7).

He sought to motivate them strongly

We can expect, then, that Paul's joy over the success of his spiritual children matched his concern for them. And how great that joy must have been!

Paul Gave Thanks for the Spread of the Gospel

Thirdly, Paul thanked God because many, many people were hearing the gospel through the faithful witness of the Thessalonians. For Paul, no cause was more important than God's exaltation among the nations through the salvation of souls. This would only be possible through the churches' faithful proclamation of the gospel in their own lands. And so, Paul's strategy was always to establish a church in the largest and most progressive cities in a region. He would then entrust to them the responsibility of reaching their city and other neighboring cities and towns. The Thessalonians, to Paul's delight, were remarkably faithful to this calling.

“For the word of the Lord has sounded forth from you, wrote Paul, not only in Macedonia and Achaia, but also in every place” (I Thess. 1:8).

Paul Gave Thanks for the Growth of the Church

Finally, Paul gave thanks for how God used the Thessalonians to build up the universal Church. We know from his other epistles, especially the letter to the Ephesians, that Paul had a deep love for the Church. During this time, however, Christians were often persecuted, and it was tempting to forsake Christ so that they could be accepted by the world. Many churches struggled with persecution, but it seems that the situation in Thessalonica was severe. Paul was therefore worried that

“the tempter might have tempted you, and our labor would be in vain” (I Thess. 3:5).

Thankfully, they stood fast, giving glory to God and greatly encouraging other churches (See I Thess. 1:7).

These are the reasons why Paul was so thankful to God for the Thessalonians. Let us reflect, brethren, on whether we are growing in the same noble attitudes as the apostle, and how we might better express these in our prayers.